My Tweets
A poor night’s sleep for all those going on the trek. We were up at 3:00 a.m for some hot breakfast and tea. We set off at 4 a.m, in the dark. It was quite an experience, walking uphill in the cold and the dark as we made our way through on some stones and a meadow to reach our first halt at about 5:30 a.m. At this point, 8 of the 20 in the group decided to take up an offer to go and visit Kuari Pass, which was a much easier trek compared to scaling Pangarchulla. At this point, I decided to leave my head torch (a bulky and powerful one) underneath some stones, to be picked up on the way back. Then, we set off onwards towards Pangarchulla.
Walking in those mountains is quite an experience. Yes, it is tiring and you do wonder why even bother with all this torture to the body. But then, you look around, there is not a soul in sight apart from your companions, no phone signals, no civilization. The sights are unbelievably beautiful and the thought of “what if I were to live here” keeps cropping up. It would be lonely, but you would almost certainly by healthy. No pollution, no gadgets and only healthy, natural food if and where you can find it. We saw the most beautiful sunrise among the mountains. 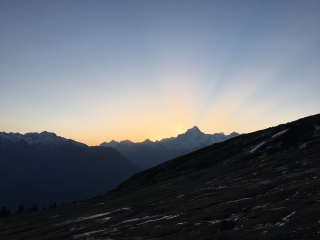 We trekked onwards and onwards, thankful to the crampons for providing us with excellent grip through the snow. I hated the weight that they seemed to add to my legs – they were at least 500 gms each and after wearing them, it just felt like I was walking with an extra weight and lifting my foot was a chore. At some places, the snow was quite deep and we stuck to the footpath that an earlier group had made in the snow. The slope was quite alarming at certain places, a sideways slip could have sent us downhill for a good 100 ft or more. We made it through all of that in one piece and reached the base of the peak at about 10:00 a.m, after 6 hours of walking. We were encouraged to have our lunch at that point, which I was happy to oblige. The guide surprised us with hot tea, served from a flask at that place too! It was welcome! We were quite tired by this time already. It had been a long trek and I thought that I had been smart with my water intake. I had not even completed one bottle as yet in 6 hours of trekking. I felt in decent shape for the final ascent.
We set off, with the expectation that we would reach the peak by 11:30 a.m. The climb from here on in was completely in snow and was slow going, in single file. The perceptions of the distance to climb were such that we would always feel there was only one more small ascent to go. Only one more. So on and so forth, until we finally go there. At the peak. 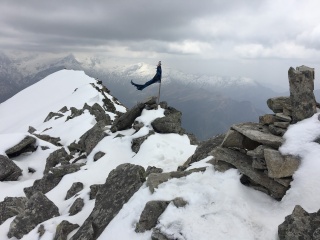 We savored the moment and the achievement for a good 20-30 mins until it started to get really cold. As long as we were moving, the body heat would keep us warm but being stationary at that height had us shivering and itching to head back. We started on our way back at 12 noon. I was dreading the descent more than the ascent even before I started on the trek. I was not very confident with my knees which have a history of pain. The trek leader was kind enough to offer his hand as guidance on the way down for about 100 m or so as we held on to each others’ hands till that point. Once we got a hang of climbing down by placing our foot sideways, we were on our own and I enjoyed it. I did not have a walking stick with me all through the trek, which was kinda important. I felt good about not walking with one. I felt that it would throw my balance off gear and have me compensate my body weight unevenly, leading to unknown complications. Anyway, the net result was that I had no stick and all in all, was none the worse for it.
The walk back through the snow was particularly fun at two places where we slid down the snow on our bums. Who doesn’t like the slide? Even 20 and 30 year olds do! The group split up into multiple small chunks as some sped down with great speed, while I was firmly in the middle of the pack. On the way back, it started snowing and raining and it brought out the raincoat. I finished the last of the water in my bottles with still another hour or more of trek left. I chose to eat an orange that I had saved, to help with the hydration. It was around 3 p.m in the afternoon, but it was cloudy and drizzling, making it seem like late evening. Dehydration was setting in and I couldn’t wait to return to the campsite asap. That last stretch of an hour or so of walk was probably the toughest of the entire trek. I was all alone, with my head down, simply putting one foot ahead of another and constantly telling myself to keep going. Don’t stop. Walk slowly, keep walking. I had to walk down stone steps which were slippery because of the rain, which added to the misery. Finally, finally, at 5 p.m, I reached the campsite and I headed straight to the food tent for water. Having had my fill of water, I reached my tent and simply collapsed inside. It was a relief! I had walked for 13 hours through mountains, snow and rain. I deserved a bit of rest.
It is also a fact that I felt dehydrated. This meant that I had to have lots of water with salt, if possible. I had carried electrolytes with me and emptied the contents into one of the bottles and kept sipping on it for the rest of the evening and all night long. Dinner was most welcome that night, with tales of the walk and the experiences through the entire trek being exchanged at the food tent.
The night’s sleep was good, but for the fact that it rained. And rains in the Himalayas are loud affairs. There was thunder and lightning. Thanks to our altitude, it felt like the thunder was right above our heads – it was that loud. With the amount of water that I was drinking, I was having to wake up to go pee every few hours. It was not easy. It was cold. I had to unzip the sleeping bag, the tent, wear my shoes, get the torch, climb out of the tent and walk a few feet away to relieve myself. Get back to the tent and do everything in reverse! I was glad when it was finally morning!